The goal for today?

The goal for today is to start 50 flats of seedlings at reroot organic farm, and NOT to spend 4 hrs digging myself out of a mid-laneway snowbank with spade, hoe & (seriously) trowel.

Thank goodness for sunshine, defrosted soil in the greenhouse and the mad skills of Jesse with my car jack.
Posted by Angie at 9:36 AM No comments:

So a couple months ago, at the Guelph Organic Conference, I was feeling all smug. Why? Because I got one of the vermicompost vendors to offer me a tote of organic worm castings in which to grow my seedlings this year - FOR FREE! All I agreed to do was run some trials to see whether they grow better than the ones in my other compost. No prob - I'd do that anyways.

OK. So a couple of days ago I talk to a rep from the company & they agree to send me my tote this week. Know what a "tote" is? It's 1 cubic yard of gorgeous black worm manure. Weighs 1/2 a tonne. Sweet!! Thing is - 1/2 tonne is heavy. And my tractor doesn't have a loader. I asked the rep to give me a day's notice before delivery so I could make arrangements.

Now it's Friday morning & the phone is ringing. It's a truck driver. He's at the farm. He has a tote of compost for me. He wants to know where to put it, and how to get it off the truck. I am at home in my pajamas.

I call my neighbour Rob (who has a loader tractor) but he is of course in the barn choring. I call the company rep in Toronto. He suggests I get the driver to tie one end of a rope to the tote and the other to something sturdy in the barn, then drive away. That makes me chuckle. I like it. At this point I think we're both imagining a pick-up truck. Worse case scenario I can always shovel, right?

I call the driver back, but he is rather uncertain of the rope method. In 10 minutes when I arrive at the farm I can see why. The tote is at the nose end of a 30' enclosed truck, on top of a wooden skid. Hm. Fortunately, my neighbour comes in from the barn & calls me back. Unfortunately, his tractor needs 1-1.5hrs to warm up. He says he'll go plug it in, but this doesn't feel particularly useful, given that the driver is here NOW and rather frustrated by the amount of time being wasted. He & I continue to scratch our heads. (Side note: turns out the driver serendipitously had a test plot at the FarmStart McVean Incubator Farm last season - this is the organization I work for in the winters! He has lots of small-farm questions for me. This eases the frustration.) He eventually calls dispatch & gets clearance to go off on another delivery & come back once the loader is working. Seems like the best option. I decide to go check on the garlic (not up yet) and do some cleaning in the greenhouse. I'm hungry & really wish I had some food along.

1.5 hrs later I get a call from the driver who's now 20 mins away. I hop in the car & head out to fetch the neighbour. My laneway is a rutty, muddy disaster. I'm gunning it to plow through the muckiest stretches, skidding all over in my attempts to avoid getting sucked in. Great - wouldn't it be fantastic if the delivery truck got stuck... In opening my window to get a better look at the fields I get a face-full of mud as I drive through a big puddle.

Well, to finish things off, here's how the story ends: 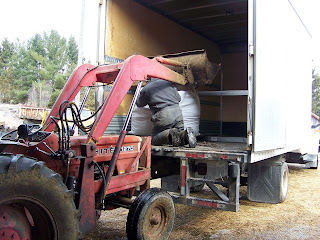 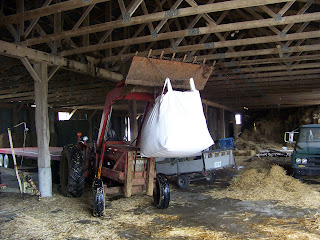 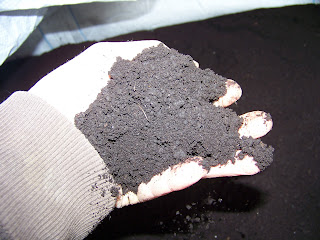 Actually, I wish this gorgeous, rich, black stuff was the end of the story. The story really ends with a tow truck dragging my overheated, coolant-leaking car off to the shop after a long drive home coasting down hills and pulling over to cool down every 2 blocks. And also with the explosion of my coffee as I plunged the bodum, spraying my fridge and floor with the liquid consolation I would not get to consume.

I remember this.... the birds & flowers & sprouting things are truly exciting, but this too is a sign of spring. Cheers to the bumpy start of another season.
Posted by Angie at 10:16 AM 2 comments:

The very first seedlings have emerged!! Here's the tiny first loops of green onions poking through the starter mix: 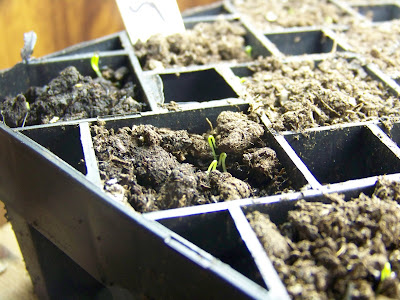 (I did the first happy dance of the year when I spotted them.)

Just seeded the leeks and bulb onions on the weekend up at Caitlin's greenhouse. The leeks are quite the investment. It's amazing to think that something I started on a snowy March day won't be filling our bellies until October when the snow may just be flying again.

PS Just this afternoon I pulled an installment of 2010 leeks out of storage & they're still looking good.
Posted by Angie at 5:03 PM 4 comments:

This feels a bit funny to be posting this morning, given the freshly accumulated snow outside, but I wanted to let you know that I'm running a few gardening workshops this spring - 1 at little city farm, and 2 in response to the requests of neighours and CSA members. Here's the 'deets: 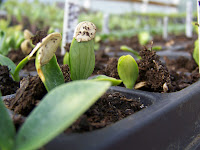 Vegetable Garden Planning
Saturday April 16th, 2-4:30, Willow St. Waterloo
Ever wondered how often you should sow salad mix or transplant lettuce? When you should seed beets and carrots for a fall crop? Which crops you should just plant once vs multiple times each season? This int/adv workshop will focusing on aspects of vegetable succession planning and cover some questions of companion planting and appropriate yard-scale cover crops as well. Lots of time for Q&A. Take your gardening to a new level!
Cost: $15. Sign up at info@fertilegroundcsa.com 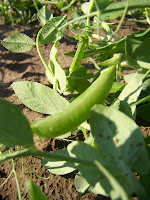 A this beginner-level workshop we'll be building a double-dug bed from scratch in Lisa & Jay's backyard! This workshop is all about bed preparation, intensive planting techniques and basic organic growing/maintenance methods.
Cost $15. Sign up at info@fertilegroundcsa.com

Seedling Sale
Saturday May 21, 9-12, Little City Farm
This isn't a workshop but it's a great place to get your garden seedlings! All organically-grown.

Also - here's a publication put out by Canadian Organic Growers that you might find helpful: The Organic Backyard: A guide to applying organic farming practices to your home or community garden.
Posted by Angie at 12:59 PM No comments:

And the Season Has Begun

I suppose yesterday was my official end to winter - the very 1st seeds of the season have now been planted! We headed out to the greenhouse in the afternoon's grey drizzle to find (as feared) a pile of still-frozen bags of potting mix that my fall self was convinced would be melted by this point from the late winter sunshine. No such luck: 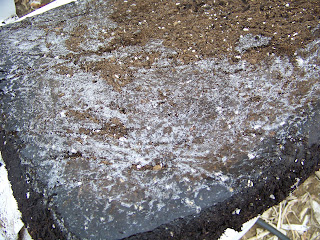 Johnny was a trooper and - between the shovel, sledgehammer and hot water brought from home - managed to break it all up. 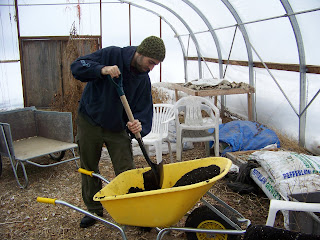 I mixed it with the compost (thankfully the bin of it in the greenhouse it had melted in last week's sunshine)... 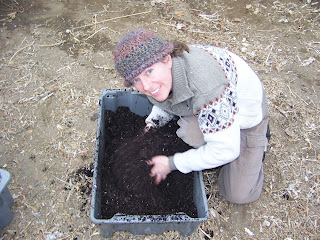 ...and we filled the trays. I'm trying out some new winstrip trays this year - they're sturdier & should last for many many years, instead of migrating to the landfill every few seasons. 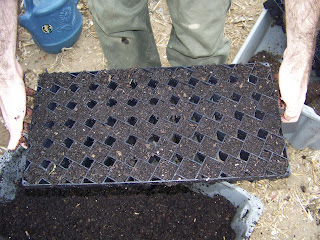 On the seeding list were the perennial herbs, and round 1 of green onions. 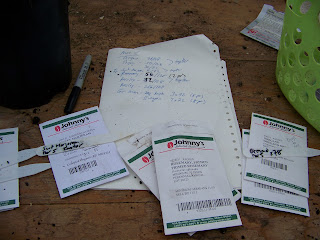 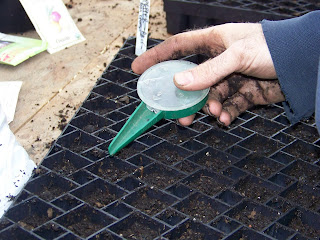 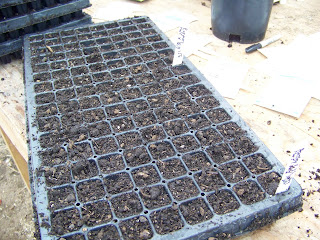 Some very frozen fingers later, we had the herbs finished. Sadly, it seems that the structural soundness of the mesh on the greenhouse tables became compromised over the winter.... 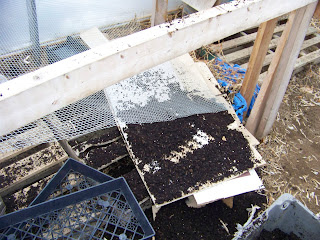 "Ugh" does not begin to capture my frustration. I'll have to wait for new herb seeds to arrive in the mail - we'd used them all up. Depending on how long it takes, this might mean no perennial herb seedlings from me at the Seedling Sale May 21st. Fortunately the green onions at least survived!

Call for a Moratorium on GM Alfalfa!!

Presentations will be made by a variety of proferssors, the Organic Council of Ontario, and the president of Croplife Canada, and will be followed by question and answer period from the audience.

**********************
I've been writing a lot of letters on this subject recently. First, in support of Bill C-474 (a Private Members Bill which would have required that “an analysis of potential harm to export markets be conducted before the sale of any new genetically engineered seed is permitted.”), which was unfortunately voted down; and now in favour of a moratorium on GM alfalfa.

GM alfalfa is a particularly threatening application of bio-technology. So far, the GM crops that have been approved for use in Canada are all annuals: corn, soybeans, canola, and sugar beet. Alfalfa, however, is a perennial crop & is pollinated by bees which travel and spread pollen over many kilometres. If GM alfalfa is released for sale in Canada, the eventual contamination of organic alfalfa is inevitable. Alfalfa is used as pasture and feed by livestock farmers, and as a soil-building green manure by many organic farmers. Since alfalfa (and alfalfa-fed meat) is a key export crop, both organic and conventional farmers are concerned about losing their best export markets as a result of the inevitable contamination.

Organic livestock & dairy farmers in particular stand to lose everything, since there is no substitute for alfalfa as feed, and cross-contamination of organic pastures could result in a loss of certification for organic livestock producers.

The crazy thing is, even conventional farmers don't NEED herbicides for alfalfa crops, since it is quite capable of out-competing weeds. Therefore, the "need" for GM alfalfa (modified for herbicide resistance) is clearly for the benefit of multinational seed companies, not farmers - conventional and organic alike.

OK. So here's the GOOD news:
On March 3, Liberal members of the House of Commons Agriculture Committee tabled a motion calling for a moratorium on the approval of genetically modified (GM) alfalfa in Canada!

What can you do?
1. Write the Agriculture Committee members and your local MP asking them to support a moratorium. You can do this easily (and learn a lot more about GE Alfalfa) at the Canadian Biotechnology Action Network website.

2. Come to a public forum on the issue Thursday, March 10th in Guelph (see above) which is being organized by Frank Valeriot, Liberal MP for Guelph and member of the Agriculture and Agri-Foods Committee. There is a bus being organized from KW which you can reserve a spot on by emailing Jacob[at]organiccouncil.ca. This is a really key opportunity to communicate to federal politicians that Canadians care about the GM issue!! The Committee wants to see if there is as much support as they are beginning to suspect there may be... Please come. (There is an event invitation on facebook, so please invite your friends)
Posted by Angie at 5:19 PM 2 comments: