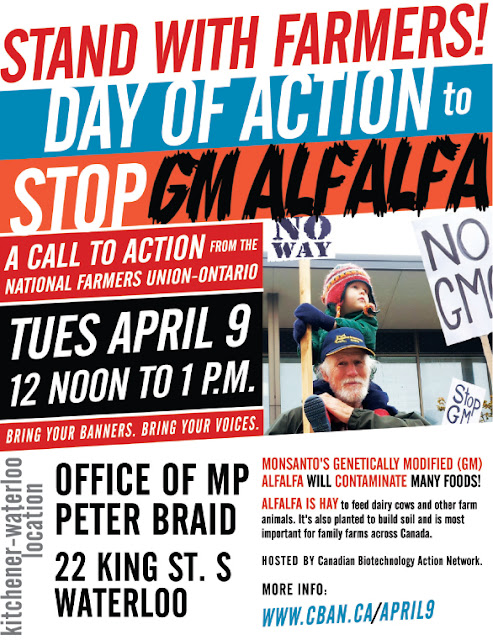 Next Tuesday, April 9th, there will be an action outside Peter Braid's office to help stop GM alfalfa from being released in Ontario. This is an incredibly important and urgent issue - companies may be trying to introduce Roundup Ready alfalfa to Ontario markets as soon as this spring. Since it is an insect-pollinated crop, the risk of contamination from GM to non-GM alfalfa is very high, and the effect on pollinator  health is yet unknown. Alfalfa is one of the main crops in hay and is used to feed many animals. It is also an important soil builder in organic crop rotations. The release of GM alfalfa would have a massive impact on organic farmers: because of cross-contamination, we may no longer be able to use alfalfa as feed or as a nitrogen-fixer in our cover crop rotations. The release would also increase herbicide use (alfalfa is not currently a herbicide-sprayed crop), and make it even more difficult for eaters to keep GM food out of their bodies. Once released, genetic material can't be taken back so we only get one chance at this.

Fertile Ground will be at the action on April 9th - please come out and join us! Children are oh so welcome. I would love to have a huge presence from the CSA and farm supporters to send a strong signal that this is an issue that matters to EVERYONE concerned about both personal and environmental health, not just farmers:

Click here for more information about GM Alfalfa and these cross-Canada rallies.
Spread the word! Please post widely, and pass this around to friends, family, colleagues and anyone else you think may be interested!
Flyers and posters can be found here.