We’ve been using the word “organic” to describe our growing practices for 3 years now because it’s been true. But I’m the 1st to admit it’s a bit of a confusing term. Many growers claim to be “organic” simply because they don’t spray chemicals on their crops. A surprising number of consumers assume that local and organic mean the same thing. Both of these are actually limited (or even entirely misled) assumptions about what it means to be organic.
Growing organically involves not only what a grower cannot do (spray chemical pesticides or herbicides, use treated seeds, apply synthetic fertilizers), but also what they must do. Certified organic growers are expected to practice crop rotations, use cover crops to protect against erosion and build organic matter, test water quality, minimize soil disturbance, and keep a variety of records that allow for tracking of planting, harvesting and distribution of crops, as well as tillage and soil amendment application logs.
This year we applied – and just last week received approval! – for organic pre-certification with Ecocert (one of the independent companies approved for certifying to the Canadian Organic Standard). While our field practices were essentially already in line with standards, we’ve had to really tighten up our record keeping – something I actually really appreciate as it will allow me to compare field activities, crop yields and distribution patterns from year to year.
My initial motivation for pursuing certification was purely economic: I was afraid I’d be forced to drop my market prices if (when) it became illegal for me to use the word “organic” without certification. That said, I’ve come to appreciate the way that certification provides a definition for  the term “organic,” pushing growers to build healthy systems and protecting consumers from any misleading claims of growers who use the term in inappropriate ways.
There are, of course, consequences to growing organically. For example, we have little way of protecting against blight in the tomatoes and downy mildew in the cucumbers – 2 diseases we’ve fallen prey to again this year. Although we’ve rotated crops and sprayed kelp and compost tea, these have not been enough to deter spread of the disease during hard rainfalls. While I believe that healthy soils produce healthy crops which are more disease & pest resistant, this type of system takes years to build. I do, however, believe it is worth it, and some resulting tomato and cucumber shortfalls are a fair price to pay for building a sustainable agricultural system that improves the land over time and produces truly healthy food to feed us well.
Posted by Angie at 9:27 PM 3 comments:

Well, this morning my neighbour came by with his tractor & chains and we got everything all straightened out. His very gracious suggestion (after he offered to lengthen the cultivator posts for me after hay season)... next time maybe use chains instead of rope to secure the connection. I think I'll do that. 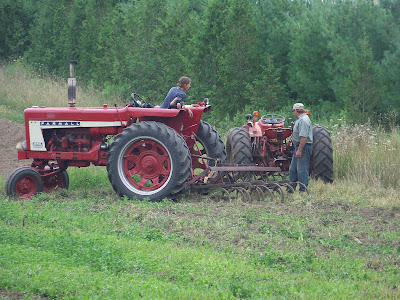 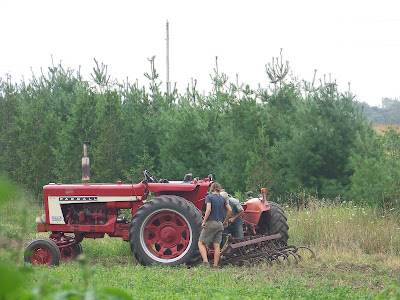 PS Taa got these pictures while hiding in the eggplant. When she wasn't popping up to take discreet photos, this is what her view looked like: 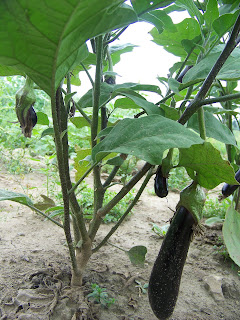 Sooo..... this is apparently what can happen when one ties an implement on with ropes. 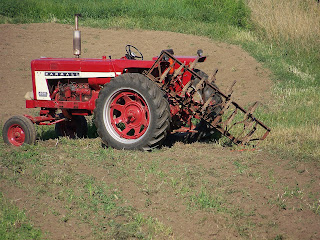 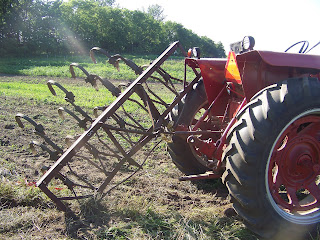 Thing is...I've been doing this for 2 seasons now. The posts on the cultivators are too short to attach to the 3 point hitch well, so I've been bolstering them with rope since the lynch pins won't fit on to secure the attachment. Guess that was stupider than I realized... Hoping a neighbour can come by with his tractor & chains to help untangle me. Yuck.
Posted by Angie at 7:03 PM 2 comments:

Friends of mine - Karin Kliewer and Greg Roberts - host a sweet little urban homestead just around the corner from my apartment in Kitchener. They offer all sorts of fabulous workshops, run a really cozy little b&b and sell a variety of Karin's homemade herbal body & health products. Karin is also a fantastic cook & baker - she bakes bread & pies for sale at my CSA pick-up every week.

Here's their daughter Maya cooling off at the CSA pick-up today in the wee wading pool her daddy made for her: 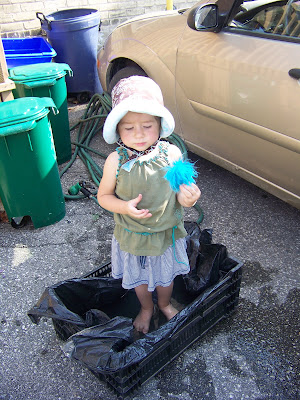 In case you're interested in learning about canning, I thought I'd mention that they're offering a salsa making workshop on Aug. 14. Check out their blog for lots of great stories, recipes, and photos of what's going on! (You can link from there to their website which has the workshop listings)
Posted by Angie at 10:39 PM No comments: