It being a warm day & all, I decided to give starting Ruby 1 more try this afternoon. Brought out battery charger, hauled a long extension cable down from the barn & hooked it up, but the charger just clicked & whirred & told me the battery was already charged (lies!!). So I called my awesome brother Jamie for advice, and he kindly swung by in his 4-wheel drive Subaru which he drove right through the snow to where Ruby sat. We hooked them up for 15 mins or so, he revved the engine a bunch, and after a few deadly-sounding clicks, Ruby's engine started to cough. A few more tries & she was running smooth!!

So now Ruby & the bush hog (which would not detach from the PTO) are tucked into the barn for winter. A few last outstanding tasks are taken care of too: I finally scraped all the hornets' nests down in the greenhouse, made sure the roof is sufficiently shedding snow, grabbed the last few wayward bins & tools still kicking around, and am ready to call it a year.

Well, other than the never-ending spreadsheets of course...
Posted by Angie at 5:58 PM 1 comment:

I need to remember this

I just got pretty much my all-time favourite CSA feedback from a member today. It's had me grinning for hours. Emily is a wonderful childcare provider to 5 or 6 little ones, one of whom ("Mr. O") came with her on a farm visit back in August or early September. I remember him carefully helping us shuck edamame beans  - with surprising patience! Now, more than 3 months later, this story from Emily:

Angie .. You and Fertile Ground have had a major positive impact on half a dozen little kids, thanks to your warm welcome to little Mr O that day we visited. He has shown an interest, hesitant at first, but now much more enthusiastic, in eating vegetables. First carrots. When I told him they're "from Angie's farm" he ate them. Of course, the younger ones had to have some too. Then it was kale. Then squash. Today at lunch I served lentils and rice and squash. "But Emily, we need kale from Angie's farm"!!!! (and Mr. O isn't even here today). Their reward for eating the rest of their food was kale from Angie's farm. GOTTA LOVE IT."

I need to remember what an incredible impact 2 hours can have on a child's life. And just what it means for kids to experience a sense of real connection with the source of their food - in person but, apparently, even just in story!

Poor Ruby. Can't get her battery to fire up (despite hooking it to the car battery for at least 10 minutes last week) so she's stuck in the snowstorm instead of tucked into the barn for winter shelter where she belongs.

Need to decide if I'm going to give starting her up 1 more try (maybe with a battery charger instead of the car?) or just tarp her & leave her in the snow. For the moment I have little choice, given that she's probably been drifted in by the recent snowfall & I doubt her engine would turn over in this cold anyways.

I don't really know how much worse it would be for her to spend the winter fully outdoors rather than in an unheated barn, but it somehow feels wrong & neglectful. 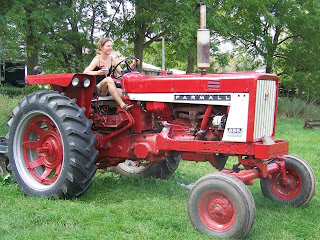