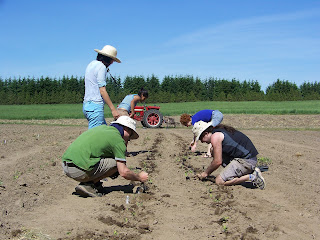 Yesterday was our annual tomato planting party. I'm always amazed by how many people show up to help on our monthly workbee days, and how QUICKLY things get done with so many hands. Rows of holes dug & hand-watered (yes, we used watering cans), hundreds & hundreds of seedlings planted and given a side dressing of compost, all in one afternoon! We even got the last row of pea stakes pounded in, some garlic weeded and irrigation tape patched. I'll add a few pics from the day - sadly I didn't capture all of the dozen-ish workers on film. 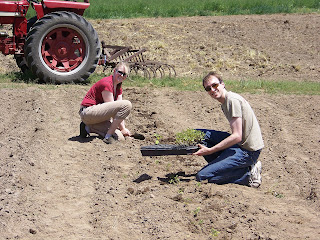 A bunch of people all appearing to be having a thinking moment at the same time... 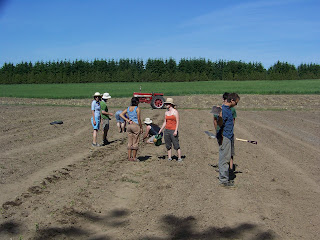 A fascinating compost-spreading technique developed by Andrew & a few volunteers: 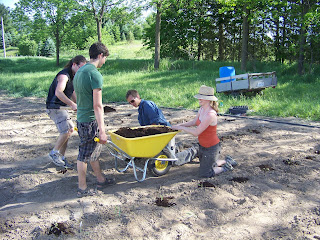 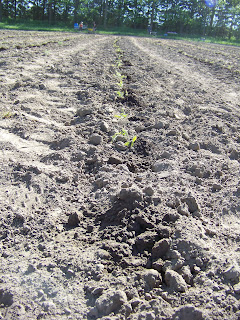 There really are good people out there...

So for a week now I've been calling all my neighbours asking if anyone has an appropriately sized plow I could borrow to turn under the rye, but everyone has plows too large for my 65hp tractor (or small but broken ones). I'd just resolved myself to calling an equipment dealer tomorrow to arrange for a rental, when an old black car with a flatbed trailer pulled up the laneway. Dean - a good friend of my neighbour Reuben Musselman's - whom I'd talked to earlier this week about fixing my discs, had loaded up his grandfather's 3-furrow plow & come by to do the job for me. He & his friend hooked Ruby up & started in on the job. They're still at it while I'm at home showered & fed. As a bonus, Dean is gonna take a look at Ruby to figure out why she coughs & splutters so much AND he's taken away my broken discs to fix up. I am SO pleased. There really are good people out there. Hallelujah for unexpected saviours.
Posted by Angie at 8:10 PM No comments:

So in my previous post you'll see how unsuccessful my attempt at incorporating the rye cover was. Yesterday, however, was far more satisfying. I used the weighted discs on the clover & they worked in really nicely.

Here I am turning them in: 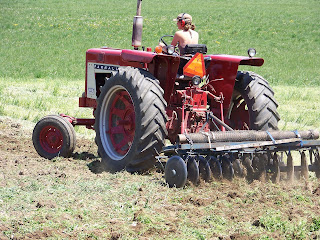 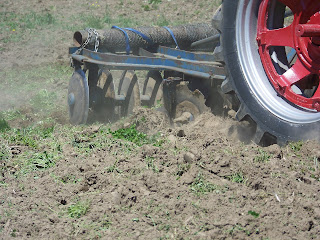 And see here the disced clover on the left vs the rye on the right! 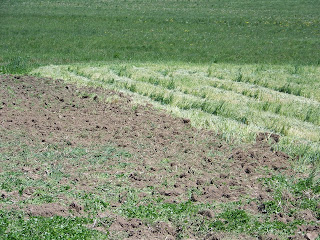 The zukes & cukes will be awfully happy to get all that nitrogen next week. Hooray!
Posted by Angie at 9:50 PM 1 comment:

The Day the Gong Show Came to the Farm

So... I decided that starting a blog might just be the only way to redeem this day. It really was a Gong Show episode - a couple of them even...

Episode 1
I've been experimenting with cover crops. I don't like to leave the ground uncovered longer than necessary, and my sandy soil needs all the organic matter accumulation and water retention it can get. I've got 2 fallow blocks in my rotation, and last fall they were both seeded to fall rye. It came up BEAUTIFULLY this spring. Since I don't have a plow to turn it under, I've been waiting until it started forming seed heads to mow it down & turn it in. This is the point at which the energy of the plant is drawn out of the roots & put in the seed, making it much easier to kill. Yesterday I could feel it - it was the perfect day to mow it down. After hooking up the bush hog & hopping on Ruby, I drove her into the waist-high grass & started chopping. It was a bit sad to see the lush green growth hacked down & replaced with ankle-deep, yellowing stubble, but satisfying at the same time.

Step 2 involved incorporating all that grassy matter. That was today's work, and the 1st chime of the gong. I hooked up the discs & (thanks to a suggestion by Jeff Boesch) weighted them down with a heavy bar & some cinder blocks, hoping to improve their ability to cut through all the trash & root mass. Ha. Serious excercise in futility. Although I tenatiously disced the entire patch in both directions with the discs set as deep and stiff as possible, by the end I could hardly see to drive the tractor there were tears blurring my vision for laughing so hard at myself as I watched the discs bounce uselessly across the surface of the thatch & trash. I probably should've realized my wee set of discs would be no match for 4' of well-established rye. I feel like such a fraud calling myself a farmer sometimes... I didn't even try starting in on the other block. 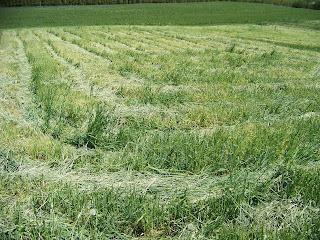 The disced rye (the front bit is the tractor path & the middle brown bit is where the kale was, so those don't count!): 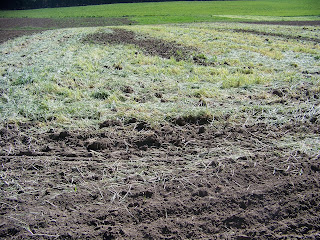 Sadly, other than the disced one being kinda flattened, they're not so different.


Episode 2
After the rye fiasco I called a lunch break - I needed time to puzzle through my options & make a few phonecalls. Just as we were about to head back to the fields Sarah Hemingway showed up, ready to take the hives apart for their spring cleaning. This is the 2nd year of bees at Fertile Ground. I LOVE watching them - especially when they come flying home with big fuzzy thighs packed full o' pollen like teddy bear body builders. (You can see 1 below) 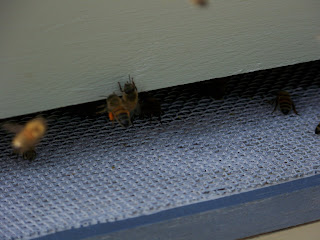 Generally the bees are quite friendly & docile, though last year when Sarah was cleaning the hives she did get stung 9 times. Granted, she was wearing short sleeves & no gloves that the time. Anyways, this year she was taking no chances. I suppose it must be quite upsetting for them to have their entire home torn apart. I'd offered to help, along with my intern Andrew. They got geared up & started disassembling while I did 1 more job on the tractor. By the time I got back, they already had the hive taken apart. I figured I'd don some coveralls, gloves & a bee veil before joining them.

As I headed towards Sarah's van to pick up the veil I got dive-bombed by my first bee, which unfortunately got stuck in my hair. Ripping out my pigtail elastics & combing through with my fingers until it finally got free was not a great start. Nervous but still determined to get in on the action, I managed to get the veil on and started heading towards the hives. The bees were MAD today though. As soon as I got within 30' of the hive they started attacking, bouncing off my veil & crawling angrily all over my body. These were not happy bees. Eventually all of us were driven from the area of the hive, wandering all over the fields to try to lose them. No avail. They followed us everywhere. Even after Sarah packed up & headed home (bee veil still on - seriously), Andrew & I were driven to the far beds to weed carrots ensconced in our full bee gear, even though there was over an acre between us & the hives!! YOU try wheel hoeing in quilted coveralls & a bee veil on a warm, sunny day...
Posted by Angie at 5:29 PM 3 comments: